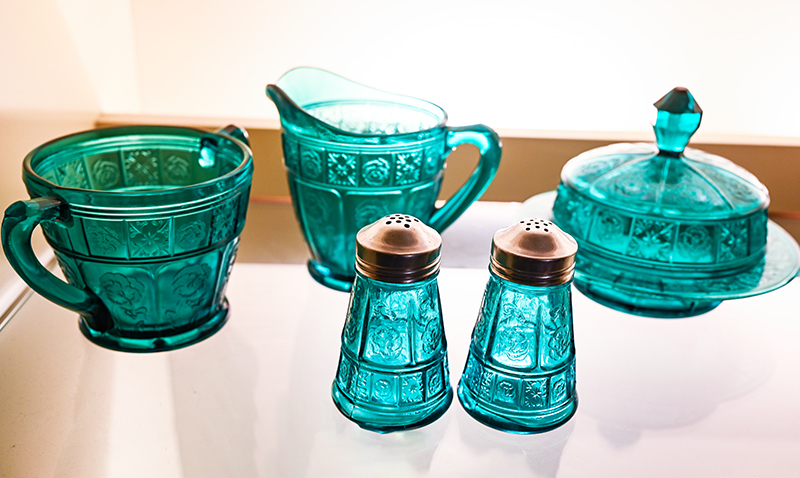 I’ve got a passion for depression glass. Is there a line between being a Collector and being a Hoarder? Because I think I’m on the edge!

The Jeannette Glass Company produced a line of dinnerware that I fell in love with. The pattern is called Doric & Pansy, and the color I collect is called Ultramarine. This pattern/color combination was only produced for one year (1937) and not sold in the USA (Canada, England only). Which makes it difficult to find. The rarest, most expensive piece of this pattern is the covered butter dish – I’ve hoarded two. 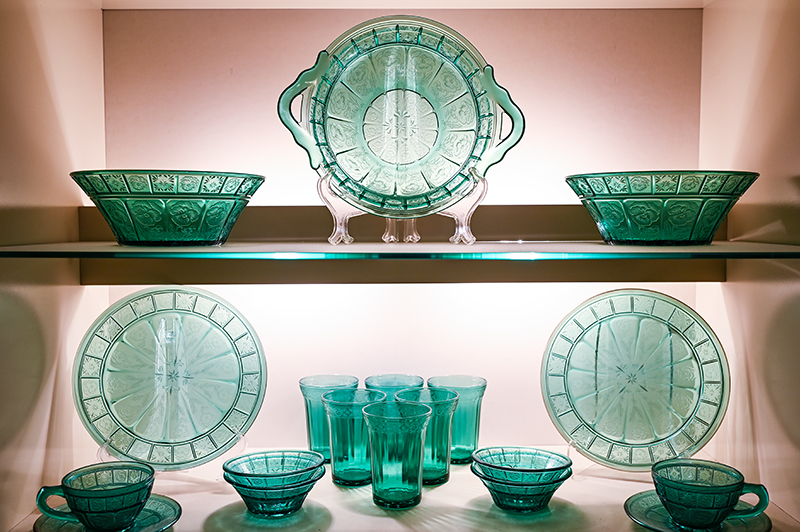 Recently I unearthed two giant boxes of depression glass my mother had saved. Some of these pieces are nearly “antique” status, as they are approaching 100 years old. Her collection sent me back to my pattern books to identify the glass. Showing great restraint, I’ve decided to sell most of it. 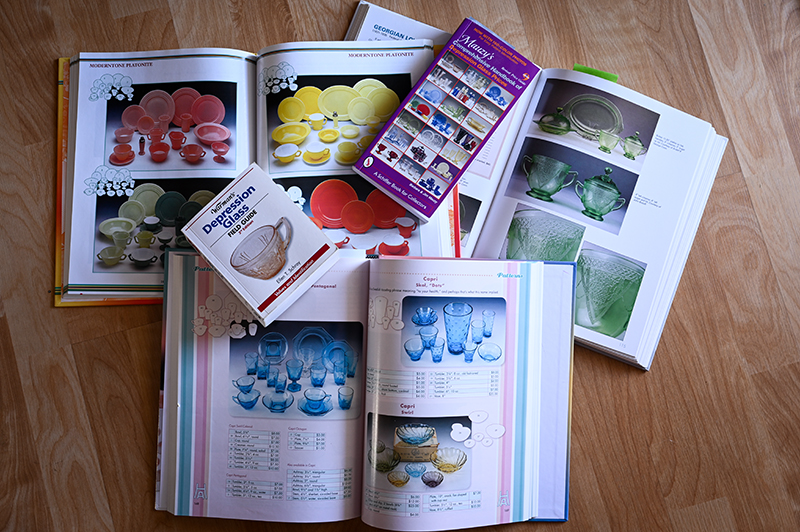 Green depression glass made in the 1930’s is often called uranium glass. Why? Because it contains uranium! Glows fluorescent under black light – it’s radioactive!

What I really want to talk about, though, is this universal human trait to acquire things. What is it about our psyche that demands we collect and hang on to things?

I read somewhere that this acquisitive nature of ours is because we’re only 10,000 years out of the caves. Early humans had to hoard food and tools in order to survive, and we still carry those traits.

But that doesn’t explain Modern Man’s habit of collecting things. Do beautiful objects get an exemption from the hoarding label? Does value play into it – either monetary or sentimental?

We admire art collectors but snicker at a house full of Beanie Babies. Really, aren’t they the same? Both have filled their caves with something they love.

There’s a big movement now to divest from possessions – to live minimalistic, without all the trappings of stuff surrounding you. It’s a bold step away from what seems to be a human instinct to collect and hoard, and it’s not for everyone.

For me, I’ll continue to sell off boxes of old things while still on the lookout for Doric & Pansy. I’m both divesting and collecting at the same time. Call me a Discerning Hoarder!

Nothing Could Be Finer Than To Be In Carolina

A subject I’m most familiar with! I’m in the same place… divesting and refining! Nice topic, Richie.

I must have shaken off the cave gal mentality, though I find it difficult to resist buying more notebooks when the BTS supplies sales are on…but I managed to avoid getting more the past two years. Pandemic breaking the cycle, ya think? Otherwise, there will still be untouched notebooks in the house when I die! Everything else gets cut down when new stuff enters the place. Have a feeling that rather than hoarding, I like buying! 🙂

I got the shopping gene, too!

Love this topic!
did they also make a purple version – called Ultraviolet?? 😉