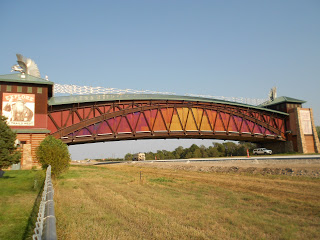 We are traveling west, following the famed pioneer trail along the Platte River. We headed out early again today and laid down a lot of miles under low hanging clouds and spotty showers. We skirted around Kansas City and passed through a small slice of Iowa, where sunflowers grow wild in the fence rows and the dirt is black as coffee grounds.

Today’s collector theme was antique farm tractors, and we saw quite a few being trailered to an unknown convention. 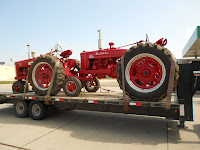 A shortcut from Iowa took us on Nebraska Highway 2 – a road that should be labeled as a crime because some contractor has surely spent time in prison. This thumping washboard of a road alarmed us so much we pulled over to check for a flat.
Around lunchtime we were back on the smooth surface of Interstate 80. If you haven’t traveled through American’s heartland, specifically the mid-section of Nebraska, let me clue you in with a single word: Corn. That’s all there is. For hundreds of miles. Nothing but corn fields. As far as the eye can reach. It’s so monotonously the same that you end up hoping for a billboard or two just to entertain you. 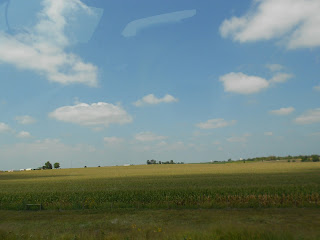 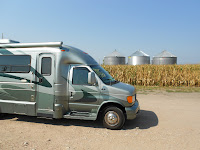 In the middle of this mind-numbing drive, just outside Kearny, we were startled to see an enormous structure arching across the road. “What the hell is that!” we said in unison. Turns out it’s a fabulous museum – The Great Platte River Road Archway. And it’s right down the street from our campground. 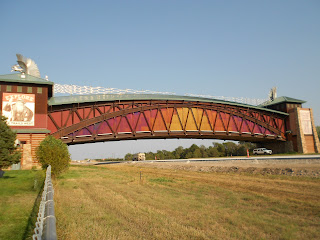 Kearny was the starting point for the big western migration. Buffalo originally made the trail along the Platte River. Indians and fur trappers followed. Then the Mormons and early pioneers took up the path. The California, Oregon, Gold Rush, and Mormon trails all begin here. The route was used by Pony Express and stage coaches, with railroads following later. When the automobile became popular, the road was improved and labeled The Lincoln Highway. President Eisenhower expanded the idea, and the original buffalo trace is now I-80.
The Archway is a splendid self-guided tour with audio phones, cleverly staged displays, and fascinating narratives. We couldn’t have been more pleased to end this long day of driving by visiting such a marvel. 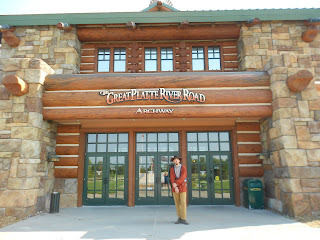 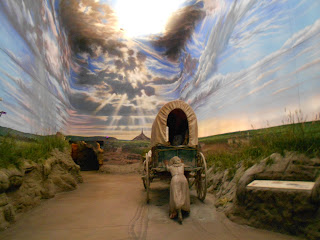 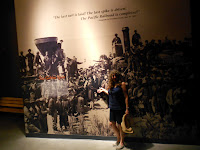