Home IN You Gotta Regatta!
IN 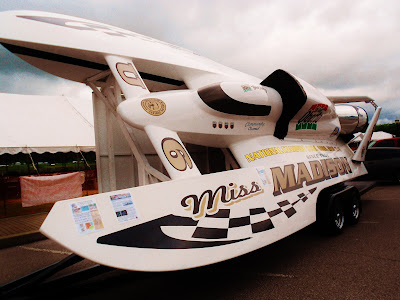 All eyes are on the skies as 50,000 fans wait for the rain to stop. The start of the Madison Regatta H1 Unlimited Hydroplane Series race is scheduled for Saturday at 1:00 pm, but officials are keeping an anxious watch on the Ohio River. For several days a steady line of rain coming from the Gulf of Mexico has dumped inches on a wide area, and the river keeps rising.

To launch the monster H1 boats for the Regatta, the Ohio River must be below 29’ here in Madison. At the Markland Dam, just a few miles upstream, the Corps of Engineers is trying to hold back the deluge. Reports say the river is now flowing over the top of the dam, and the little town of Vevay, IN, on the wrong side of the dam, is flooded.

Meanwhile, ten race boats and their crews are lined up on Vaughn Drive in downtown Madison waiting for a chance to launch. This gives fans a rare opportunity to see the hydroplanes up close and watch the crews prep their machines. 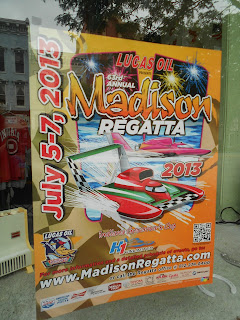 The rain held off yesterday and thousands lined Main Street for the annual Fourth of July Parade. Appreciative fans cheered the teams as each impressive H1 boat was driven slowly through town. The crowd’s favorite, locally owned Miss Madison, received a rousing reception and crew members perched atop the boat waved enthusiastically. 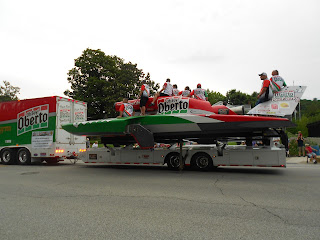 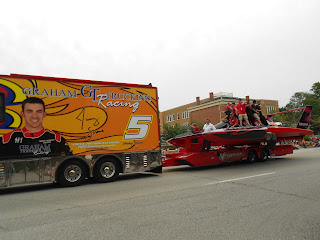 But the forecast is grim for Saturday’s race start. Up at Clifty Falls State Park, a capacity crowd of campers waits impatiently for race news. We are hunkered down in our motorhome with the motorcycle under tarp, hoping we’ll get to see the giant boats race today, as well as the fireworks show scheduled for later this evening.

Or, we may just have to pack up our soggy gear and go home.