Hoo boy – it’s been a month of mishaps. Is Mercury in retrograde or something?

A couple of weeks ago our much anticipated high-speed internet was finally installed. It lasted two whole days before we ripped the cable off the house with the RV. 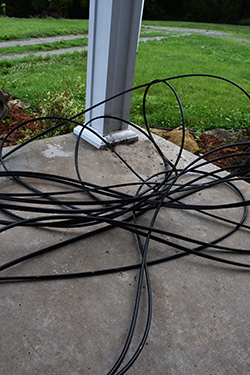 Yeah, the cable guy hung the wire too low and it snagged on the roof of the RV the first time we passed underneath.

We killed the brand new cable as we were leaving to visit my folks to celebrate Memorial Day and mom’s birthday. But a mishap landed my mother in the hospital for the long weekend. All is okay and she’s doing fine now, but there’s a lot more to the story including mom’s daring dawn escape from the hospital and a mad scramble to find a home for the feral cat and her five kittens that had taken up residence in a closet. 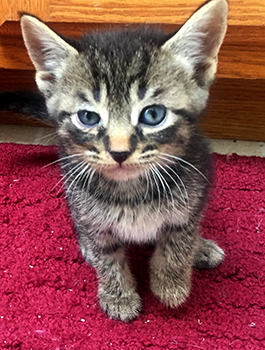 As if the weekend wasn’t wacky enough, on the way home from my folk’s house we ran over a giant hunk of truck tire in the road. I saw it coming, hoped I could veer around it, and clipped it on the right side. Running over a three-foot chunk of rubber makes a terrific noise and breaks a lot of important RV stuff. Our electric steps twisted like taffy and a propane line got corkscrewed. Insurance will cover most of it and repairs are scheduled for later this month.

After all that mess we then enjoyed a spate of more mishap-y stuff back home.

Continuing the Stuff Breaks theme, yesterday our trusty pull-behind mower that we use at the cabin threw a belt or maybe a clutch and we’re waiting for that repair guy to show up, too. Luckily we have other mowing machines that can do the job, they’re just a lot more fussy to deal with. 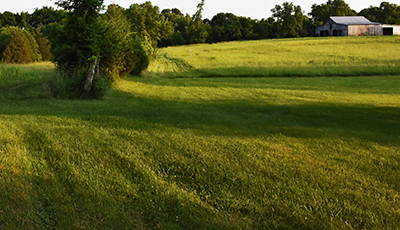 There’s a lot to mow around here in the summer – probably about 8 or 10 acres. Plus a couple of roads to keep clear of low hanging limbs and overgrown weeds. Mother Nature is always faster than we are, so it’s pretty much a constant effort to keep things tidy.

But hey, that’s what country living is all about. And that’s life on the road, too. Mishaps occur and you just have to open your wallet and laugh it off. Or cry it out. Right now I’m doing a little of both.