Low and Slow to See a Show in Columbus 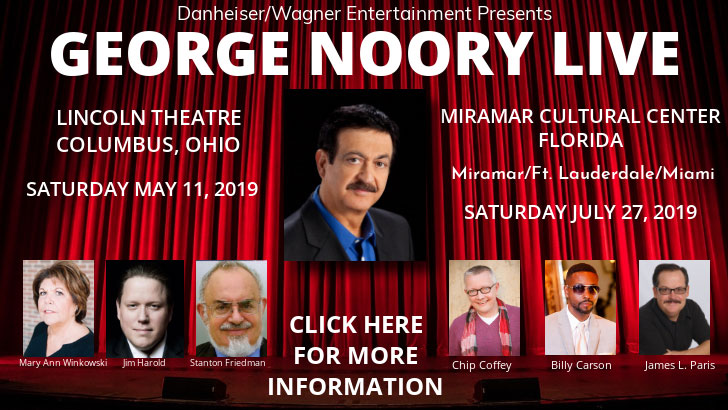 Are you a Coastie? Ever heard of the radio show Coast to Coast? It’s on in the wee hours of the morning – 1:00 to 5:00 am – so you’re pretty much a night owl if you listen to George Noory’s broadcast. Or, like us, you can listen online at a more sensible time of day.

Coast to Coast fans tune in to hear the far-out alternative news. Want to learn how to read tarot cards, talk to angels, or build a time machine? Or maybe you’ve got a Bigfoot or UFO story you want to share?  You can hear it all on Coast to Coast. Each night there’s a couple of experts who talk about their (wacky) fields. It’s mighty entertaining and some folks take it really seriously. George Noory is a pleasant radio host and hardly ever laughs at his guests, bless his heart. A couple times a year he puts on a live stage show, which is what brought us to Columbus, Ohio.

Once in a while I like to get off the interstate and take the low and slow way. If the roads are good it’s a lot more pleasant driving the RV along the byways instead of highways. So instead of slogging through the choking traffic in Cincinnati, we headed up north via Maysville, Kentucky.  There’s a splendid new bridge in Maysville that crosses the Ohio River and we breezed right over with hardly any traffic at all. 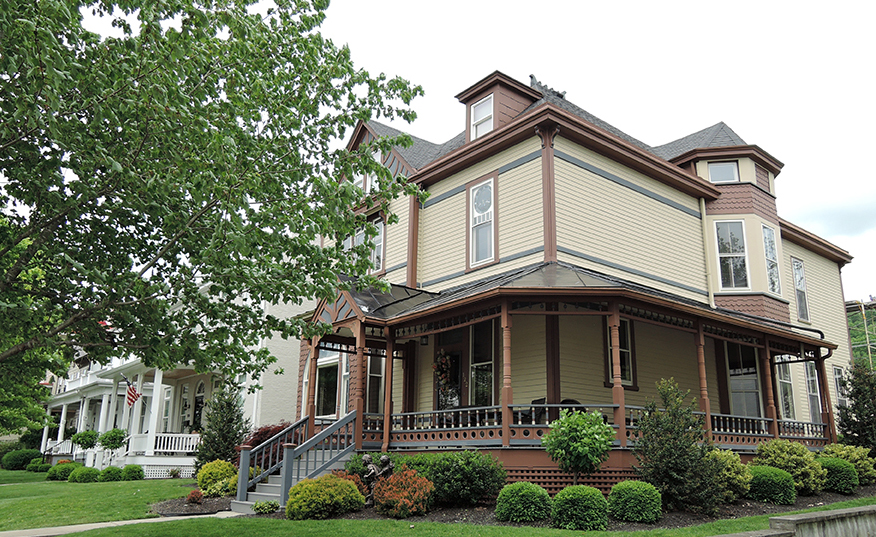 Just across the river the tiny town of Ripley, Ohio was our destination for lunch. While downtown Ripley is going through some changes, the historic mansions lining Front Street are in wonderful condition. You can just imagine the riverboat captains of yore stepping off a steamboat to walk home for supper. We stepped off the RV to lunch at the historic Cohearts River House. 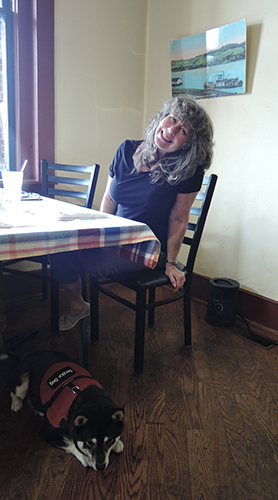 That evening found us camped at a pretty lake in Rocky Fork State Park. We arrived in a downpour so fierce that even Tim thought we might have to pull over and wait it out. If it hadn’t been for that wrong turn at Mt. Orab we would have been happily tucked in our campsite by the time the storm hit.  Well, that’s what you get sometimes when you take the back roads…a little lost!

Our next stop was to see the ancient Indian Mounds at Chillicothe. There’s groups of mounds all over this part of central Ohio, but the Hopewell Culture Center are the best preserved. It’s part of the National Park Service, free to get in, and can be filled with buses of school kids like the day we visited. 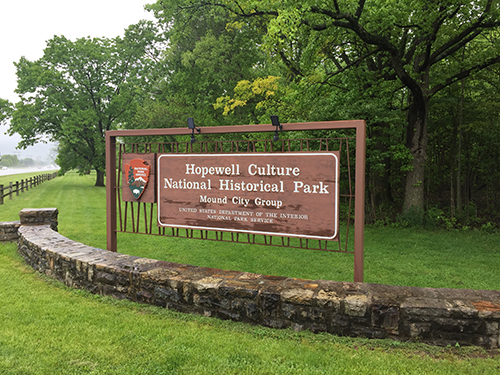 The Indian mounds at Hopewell are located in a large field. They are big earthen mounds without any tunnels or caverns or graves inside. The mounds are solid dirt, big humps in the grass, oddly placed and perfectly rounded. There’s not too much to see other than the mounds themselves, and since it was raining again we did a quick tour around and then ducked into the museum to learn more about these strange artifacts. 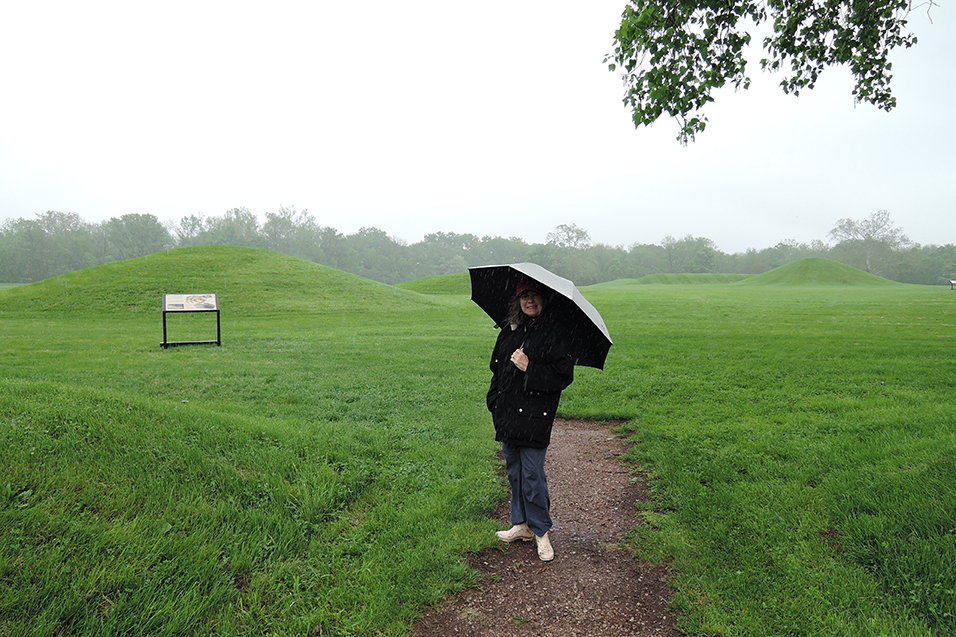 The mounds around Chillicothe and Hopewell are a mystery. They’re about as old as the pyramids in Egypt, and like the pyramids nobody knows who built them or why. Archaeologists will tell you that the sparse native Indian population built these giant earthen mounds one basket full of dirt at time, over a period of many years. But back then the natives didn’t grow crops and had no permanent villages. They were nomadic, following game from season to season. So why would primitive Indians take precious time away from hunting and gathering to feed their families in order to build hundreds of perfectly aligned giant dirt humps all around the region? It doesn’t make sense to me.

I’m going to agree with the Coast to Coast folks and say that aliens built them. In fact, that’s what I said when I saw Stonehenge in England – it looked like a giant Jiffylube shop for UFOs. A place to change the oil and refresh the dilithium crystals in the warp core.

Ya know, I always tease that when archaeologists are stumped they label the thing a “ceremonial place.” That means they really have no clue what the purpose was or how it was built. And sure enough, that’s what the sign said at Hopewell Mounds. 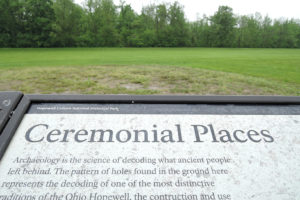 Columbus was an easy ride from the mounds. Like Indianapolis, Columbus lacks any campgrounds close enough to the city to be useful. So we were happy to learn that the state fairgrounds (Ohio Expo Center) right in the middle of the city offers camping with full hook-ups. Their website said reservations weren’t needed as long as the state fair isn’t going on – just show up and there’d be plenty of campsites available. So we were surprised to see a huge crowd of RVs and trailers parked there.

Turns out there was a big youth horse show event that weekend. The dog and I wandered around to watch the kids practice and perform. There must have been a couple of thousand kids and horses milling around, but the Expo Center is so humongous they didn’t come close to filling up the place. 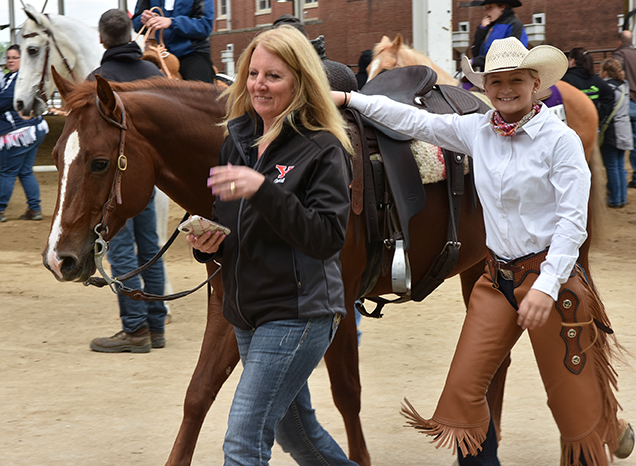 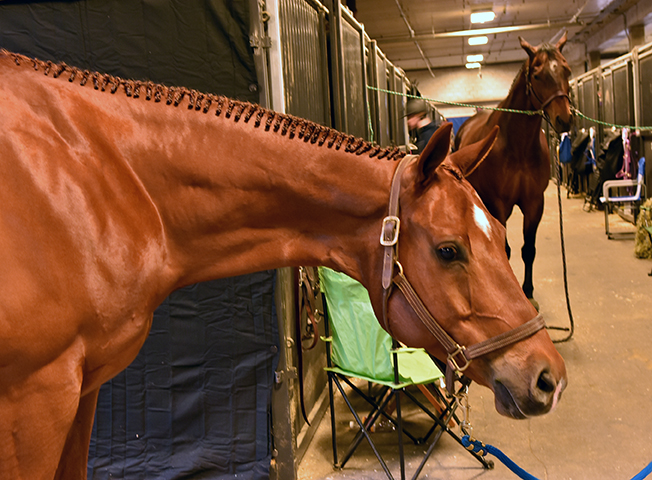 That evening we found the German Village section of town and had a great supper at Hofbrauhaus. We’d been to the original in Munich where Tim fell in love with Bavarian Dunkel beer. Here in Columbus they’ll fill a glass jug, called a growler, with the same draft beer so you can take it home. Or you can have the beer canned in a “crowler” where they pour from the tap into a can and slap a top on it. Tim was in heaven. 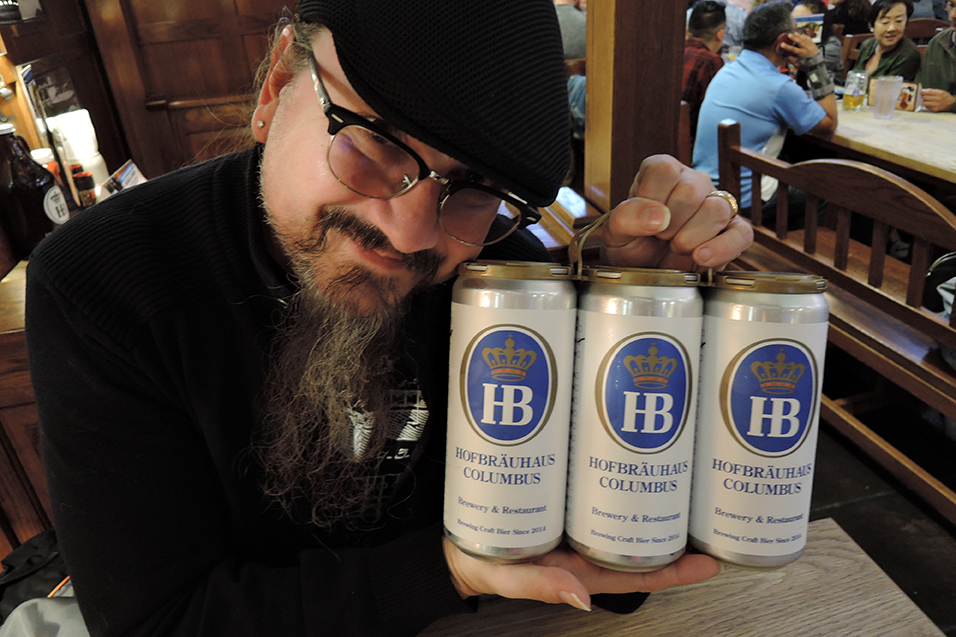 Saturday we wandered around Columbus and by chance stumbled across the Topiary Garden. This is a city park where ambitious gardeners have trimmed bushes into shapes and figures. But the amazing part is they have mimicked the famous painting by George Seurat – A Sunday on La Grande Jatte – in topiary bushes. Simply astounding!

All this adventure led up to our main event on Saturday night – the Coast to Coast Live Show in the historic Lincoln Theater in Columbus. It was a great show with a band and three experts who George Noory interviewed on stage. The big star was Stanton Friedman who is considered the father of ufology. I’ll say it again – Ufology. It’s the study of UFOs.

Friedman has written many books taking a scientific look at people’s encounters with aliens, space ships, and other strange events. Tim had Friedman sign a copy of one of his first books called Captured. It’s an account of Betty and Barney Hill who claimed to have been abducted by aliens in New Hampshire back in the 1960’s. This is a famous case considered to be authentic, as both Betty and Barney passed many lie detector tests, as well as police interrogations and psychiatric exams. 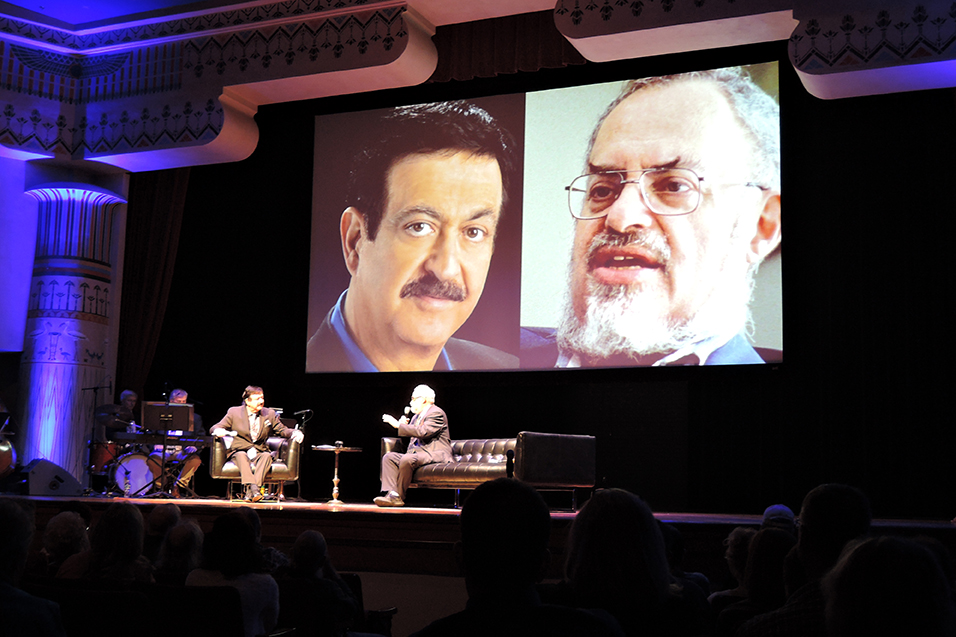 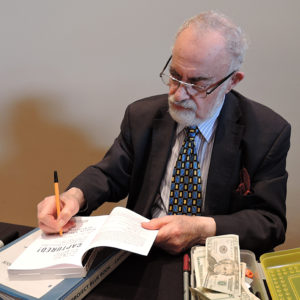 We enjoyed the Coast to Coast show and were amused by the interesting and mixed audience. There’s lots of Coasties out there, some of them look as normal as you and me, and others…well, they might sleep with a tin foil hat. Lots of fun and I recommended you listen to the show one night on AM radio. Beam me up, Scotty! 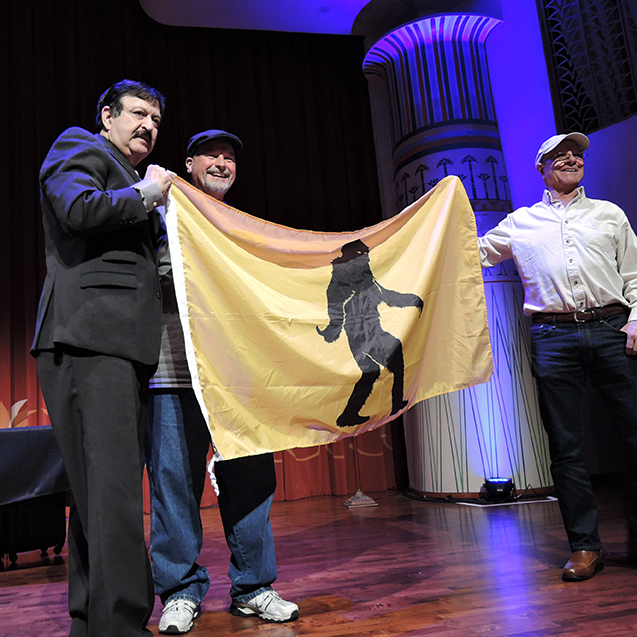 This was a great adventure. I would like to see the topiary garden and we’ll certainly listen to the radio show. You’re an inspiration everyday.

It was a good getaway. Worth a visit!