Home RV Stuff Crawling Out Of The Tent
RV Stuff

Crawling Out Of The Tent

There was a time when we were dedicated tent campers, back when we were young and thin, say about 3 years ago. We’d carry a minimum of equipment, sometimes on our back, and enjoy the sights & sounds of the great outdoors for a week or a weekend. More often than not, those nightly sounds included screaming kids, irate parents yelling at the kids, and a dog or two added to the decibels. But hey, we were out in the woods, getting some fresh air and exercise.

We’d make a point to scoff at the RV’s with their televisions and microwaves, and all manner of ridiculous electric appliances and lights spilling out under awnings twice the size of our tent. That’s not camping, we’d say. That’s just moving your living room to the woods. We couldn’t understand why anyone would need to haul around so much stuff if you’re just camping, for pete’s sake. 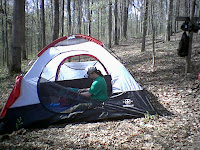 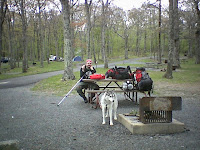 Then something changed. Maybe it was age, maybe it was the weather getting more unpredictable. But somehow we saw the light, literally a glow, of the usefulness of electricity and permanent walls. The RV world was calling, and its song was irresistible. No more sleeping with rocks and roots jammed into our backs. We could stand up indoors to get dressed in the morning. And a private toilet! With a shower! And hey, looky here, they have air conditioners and furnaces. Whoa.

It was a done deal nearly as soon as it occurred to us that this could be the way to extend our camping season beyond only the clement months of May and September.

We’d always been enamored with Class B van conversions, and with relatively little thought, other than the fact that we weren’t comfortable towing a trailer, that’s the direction into which we plunged. I started shopping around for a used unit within our budget, scrutinizing photos online, talking with dealers, and randomly picked a older Coach House 23′. Best guess I ever made. 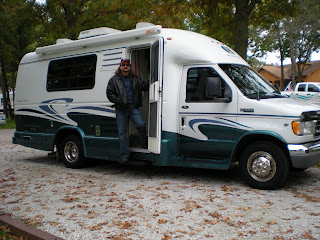 That little coach got us started, and we’ve never looked back. We’re RVers now. We’ve left the bugs and dirt behind, and our old tent is neatly wrapped up in the basement. I’ve got to say, I don’t miss it a bit.