We galloped on into Deadwood today. This town is famous for its Gold Rush days, circa 1875, and for where Wild Bill Hickok was killed in Saloon No. 10. Wild Bill was seated at a table with his back to the door, a position he was always superstitious about, when the coward Jack McCall shot him from behind. He was playing poker, holding aces and eights, which will forever be known as Dead Man’s Hand.

We hung out in Saloon No. 10 and watched a reenactment of the scene. Then I played some cards there, just so I could brag about it later. 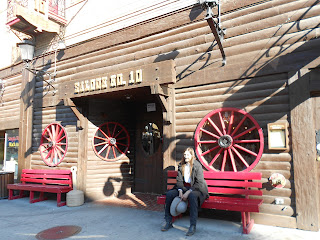 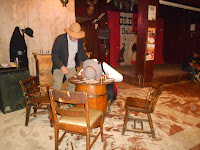 Deadwood is a lot like Bardstown, only with steep mountains and gambling in every possible building; restaurants, coffee shops, hotels and motels, wherever they can stick a slot machine. 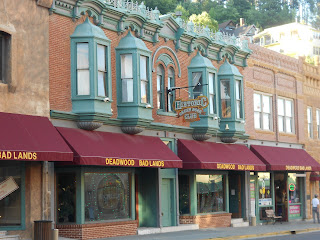 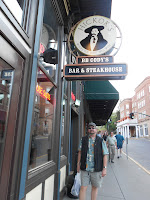 Wild Bill and Calamity Jane are buried next to each other way up on Boot Hill, in Moriah Cemetery, where the wind howls just like the song:

“Moriah makes the mountains sound
Like folks were up there dying” 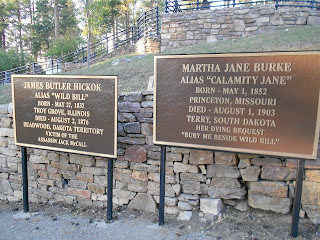 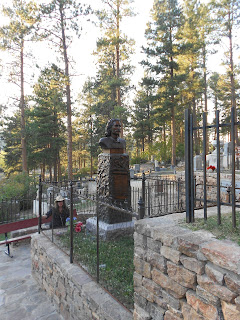 We are camped at Whistler Gulch, the site of a former gold mine. The campground is situated on a hilly slope, and at the top are the slag heaps of ore tailings and the old mine entrance. We rummaged around in the piles for gold findings that may have been overlooked, but I think all we got were just rocks.

Very cool. I never knew the story behind the “Dead Man’s Hand”

That looks like a fun place. Hope you guys are having fun.