Went to an auction looking for antiques. Bought lake property instead.
Whaaaat! How did that happen?

The morning began clear and bright, perfect for wandering around a farm auction. Tents were set up and household items were set out on long tables. Next to the little brick home, in a choppy mown field, rusty farm implements were spread out in long rows. There was a crowd of 100 or so locals shuffling around, picking through the items. I was browsing for antiques. Tim was in search of a blacksmith anvil.

The auction began promptly at 10:00, with the land and home to be sold first and then the contents. We were seated under the big tent and frankly I wasn’t paying much attention to the auctioneer, as he was obliged to read aloud several pages of legal hoo-haw.

Tim poked me. “They’re auctioning lots at Melody Lake, too.”

I’ve spent most of the summer cruising around Melody Lake, occasionally scamming a swim at their private beach – in other words engaging in some Mild Trespassing. It’s a private resort community – a stunning area with a clean, clear lake and lovely homes dotted around. It had been rolling around in my head to buy some property there, if only to have swimming privileges.

Melody Lake is just a few miles from our house and was developed in the 60’s and 70’s as a waterfront resort. It has about a hundred homes and 13 miles of graveled roads that loop around a 60 acre lake. The area is very similar to lake camps found in the Adirondacks. There’s a beach, campground, swimming pool and clubhouse. And remnants of a one-time golf course.

But sometime during the 1980’s the area fell into disrepair. The contractor went belly up, roads and buildings were neglected, some undesirables moved in and a couple of drug busts occurred. Melody Lake developed a notorious reputation. Owners got disgusted and moved away, the resort floundered, and then the area slipped out of the local consciousness and was mostly forgotten.

All that nasty business was 30 years ago, and since then the community has turned around and become lovely again. But an entrenched prejudice against the place is still present among the local populace. When I asked around this summer about Melody Lake I heard three common answers:

“I haven’t been there since I was a kid.”
“Didn’t that place go bankrupt?”
“It’s all druggies up there.”

But being a newcomer and holding none of the local grudges, I didn’t share this opinion. What I saw was a fabulous lakeside community, neat and tidy and inviting. So I grabbed a plat map from the auctioneer and studied the three lots for sale and found that I knew right where they were – about a five-minute walk from the beach I’d been visiting all summer. 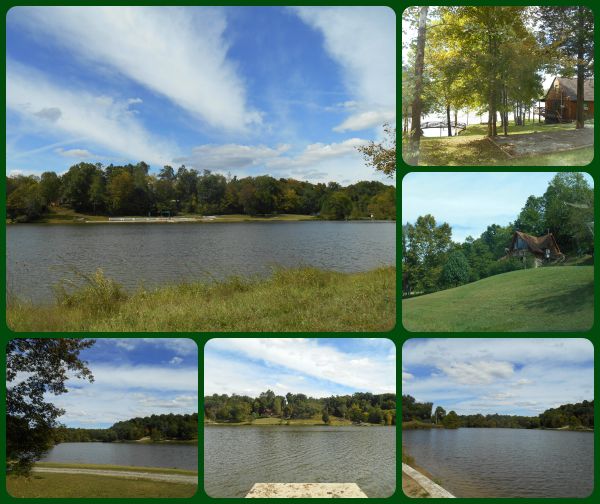 The auction started and the lots were offered for such-and-such per acre. Silence. The auctioneer lowered the starting bid. Crickets chirped. He lowered the price again. No bids from the audience. I could hear people around me muttering: …drugs…bankrupt…when we were kids…

Boldly I stood up and hollered a ridiculously low price for all three lots and the auctioneer slammed down his gavel and said, “SOLD!”

Then I had to go explain to Tim (who had vectored off looking for anvils) that we had just bought property at Melody Lake…Whaaaat!

We spent the rest of the weekend riding around the lake (beautiful), inspecting our lots (wooded), and taking tours with friends (astonished).

Don’t know yet what we’ll do out there. Maybe doze a driveway for the RV. Maybe get a little boat. Or maybe build a lake cabin.

Meanwhile, I’m going to stay away from auctions!

And I can just imagine the conversation about buying the lots. I bet I would have been on the floor laughing my ass off.

Ya know, it was a shock to both of us!

Dynamite! What a lovely commentary. And I got to be an astonished friend!

Glad you enjoyed the tour! Thanks for tramping around the woods with us looking for survey markers!