Hunker In The Bunker – Cordwood Cabin 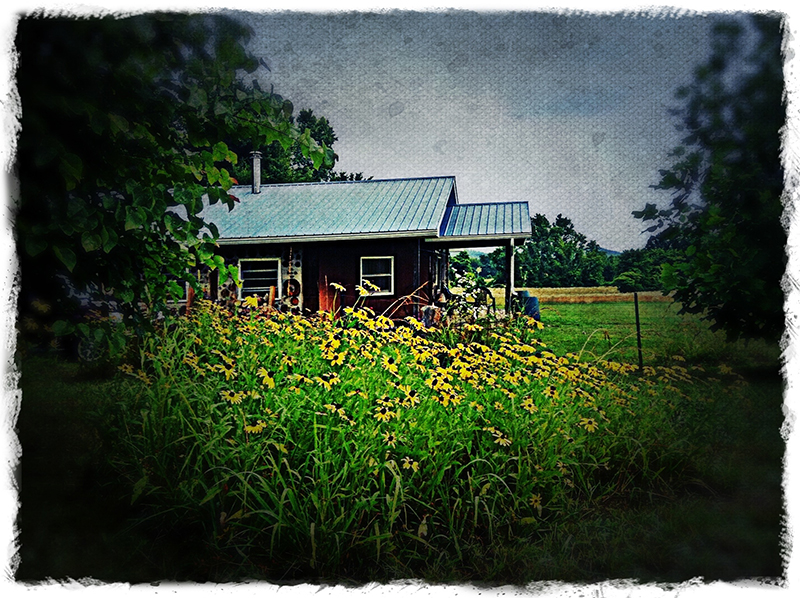 We won’t be traveling in the RV any time soon; like most citizens we’re hunkered down at home. So this seems like a good time to sit by the fire and share some cordwood cabin stories with you. 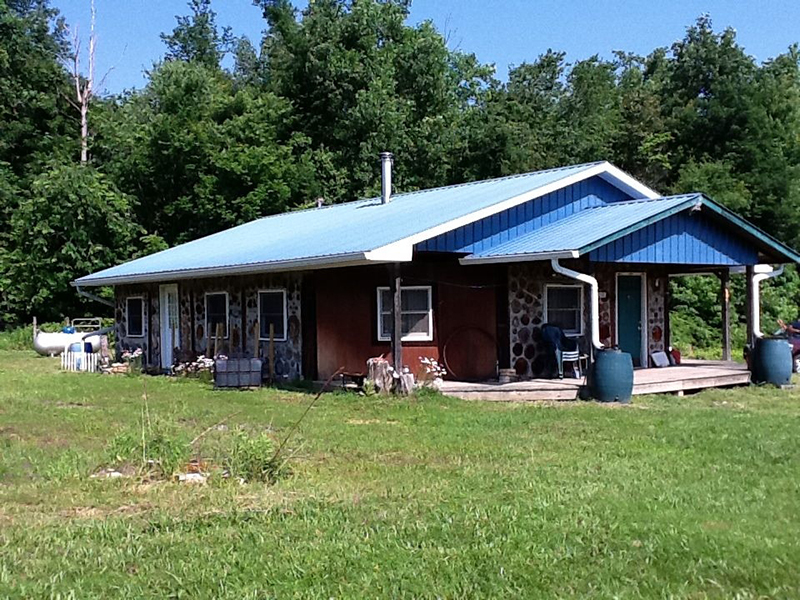 Global pandemic was not on the top of our minds when we built our little Survival Cabin. Heck, it probably wasn’t even at the bottom of the list! Who would have thunk? We were more worried about scenarios that would take down the electric power grid, like ice storms, tornadoes, and hurricanes. So we built the cabin to be self-sustaining and off the grid. It was a weekend retreat place that could double as Hunker Bunker if needed. 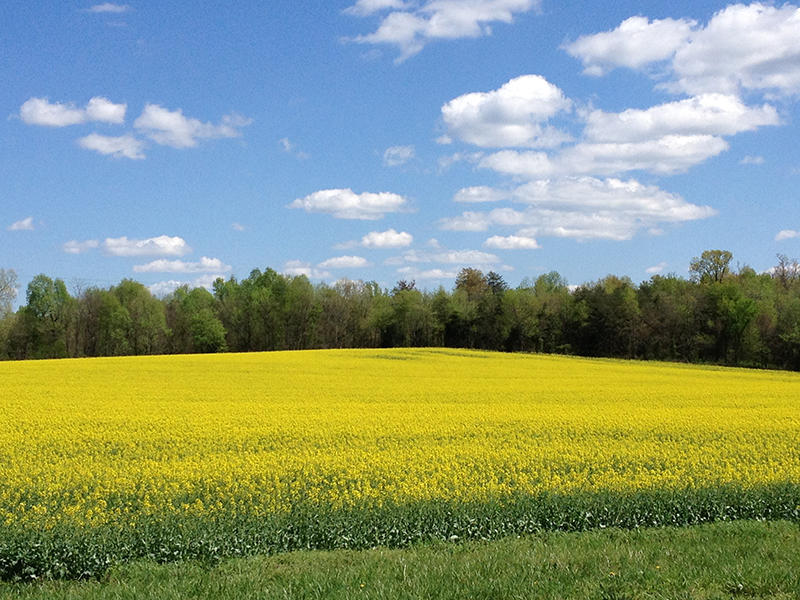 Twenty-odd years ago Tim’s folks gave us a corner of their farm when we got married. It was the perfect spot to locate a little homestead. Hills and woods behind, open rolling meadows in front, and no neighbors in sight. A little slice of country heaven! So we got a wild idea to build a log cabin here. 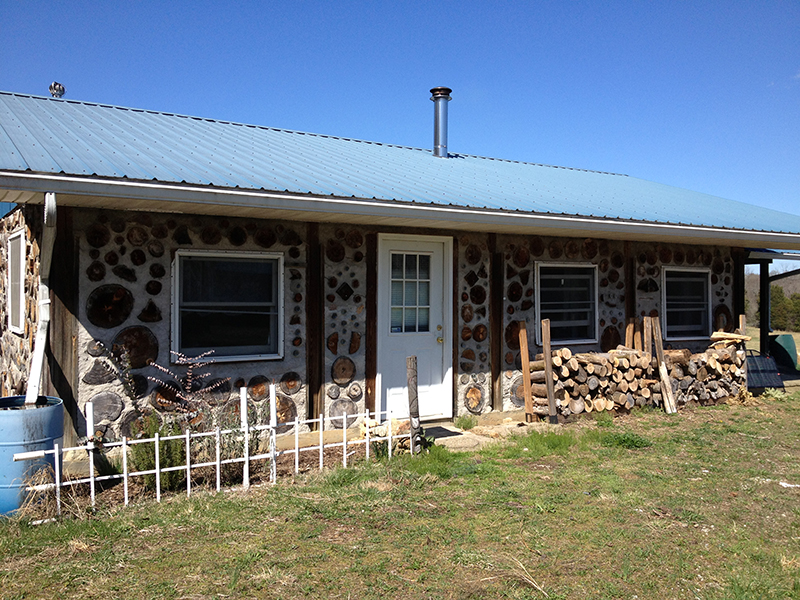 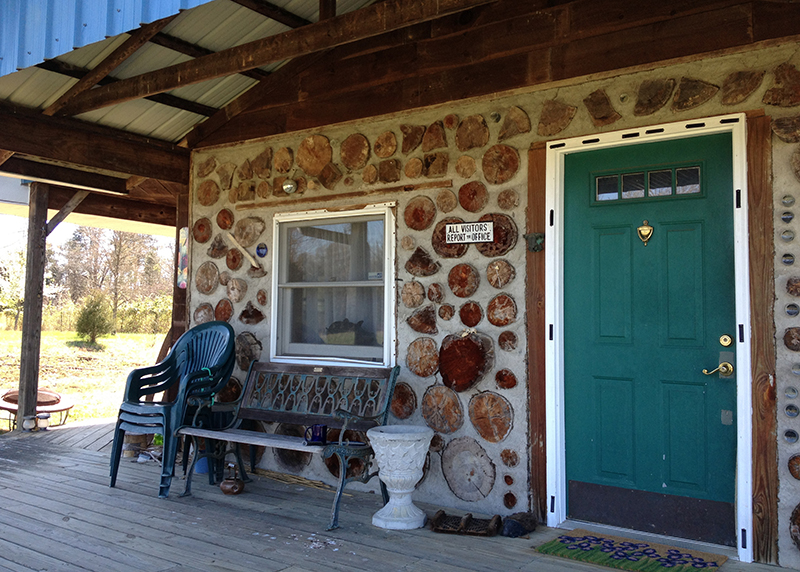 Back then Y2K was looming. Lots of folks were convinced the electric power grid would crash when the calendar rolled over to the year 2000. There was worry that the banking systems would go down along with other important technology we depended on. It’s laughable now, but back in 1999 it seemed plausible! 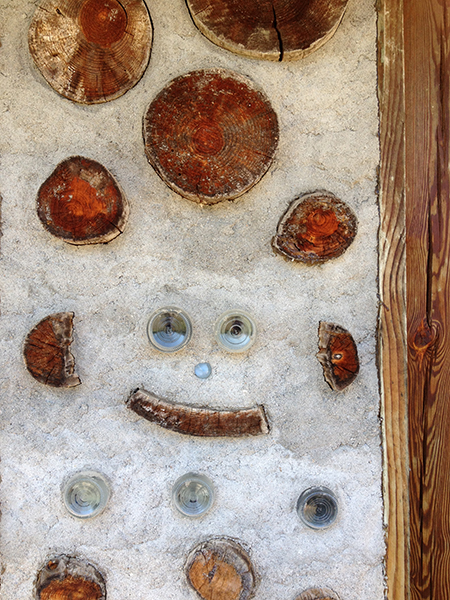 So for that reason, and a bunch of other considerations, the cabin was built to be Off The Grid – meaning no electricity. We chose a building technique called Cordwood Masonry because it looked like something we could do on the cheap by ourselves. The logs in the cabin are stacked sideways like firewood, with the ends exposed. In between is a mortar mixture of cement, sand, and sawdust. This is an ancient technique, and cordwood structures built 1000 years ago in Norway are still standing. It holds up well! 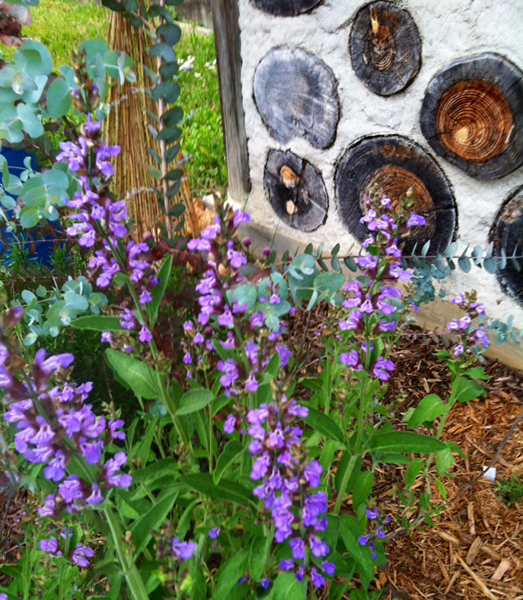 Being young and stupid, er, I mean ambitious, we launched headlong into building a cabin completely by hand. It took us a year to cut the logs, a year to build the walls, and a year to finish the inside. We had a lot of help from family and friends, but it was an enormous 3 year commitment that seemed like it would never end. Tenacity turned out to be a virtue! 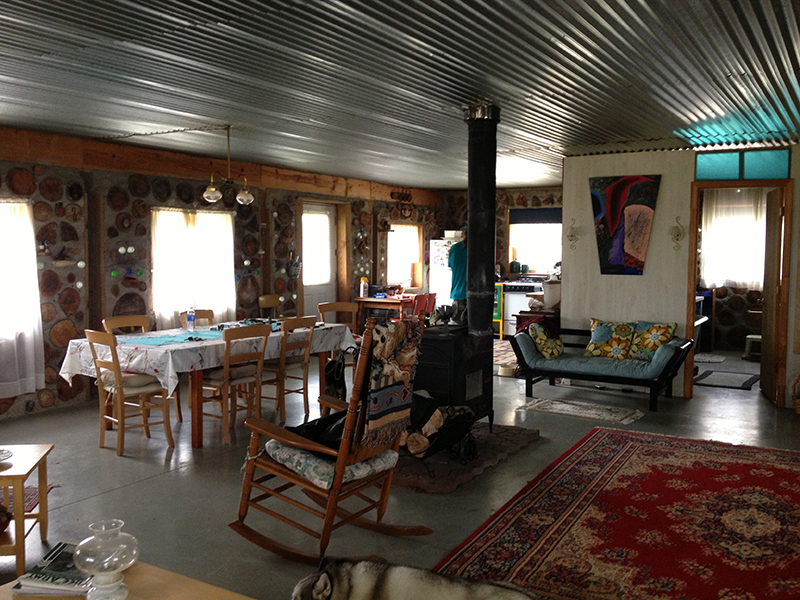 To outfit the cabin with non-electric goods, we turned to the Amish and the weirdo survivalists for ideas. Those were the days before the internet and you had to seek out information the hard way. I remember going to a Survivalist Convention in Indianapolis and walking among the skinhead militia-types to look for a wind-up radio and food storage options. We registered for the convention under assumed names, cos…damn! I didn’t want to end up on an FBI list just to buy a composting toilet. 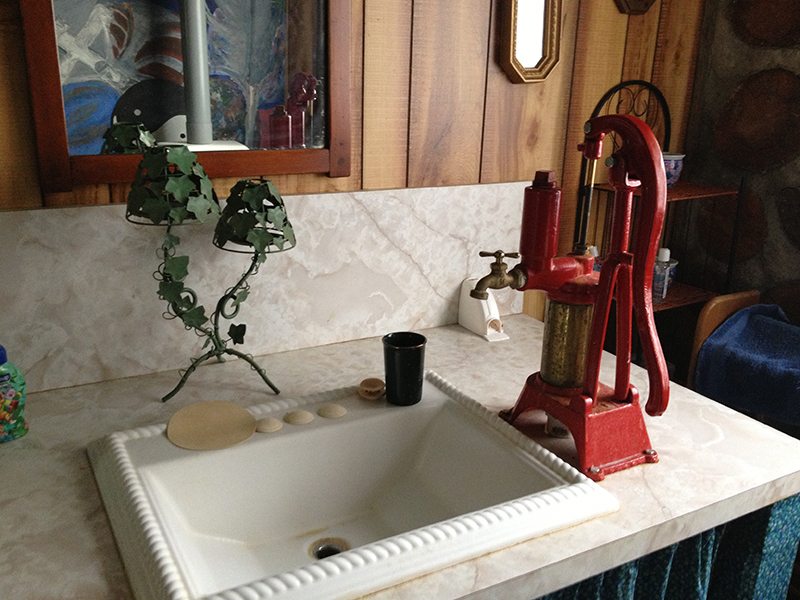 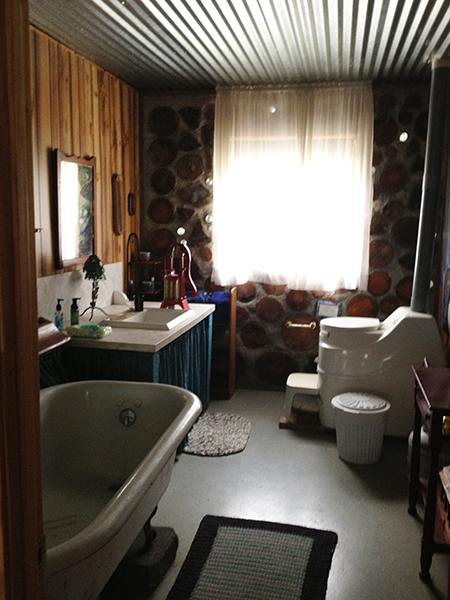 These days it’s a lot easier (and far less dangerous) to buy non-electric goods. After a decade of devastating hurricanes, floods, and fires, a lot of companies have sprung up to offer disaster preparation kits and solar charging devices. We were just a little ahead of the curve. 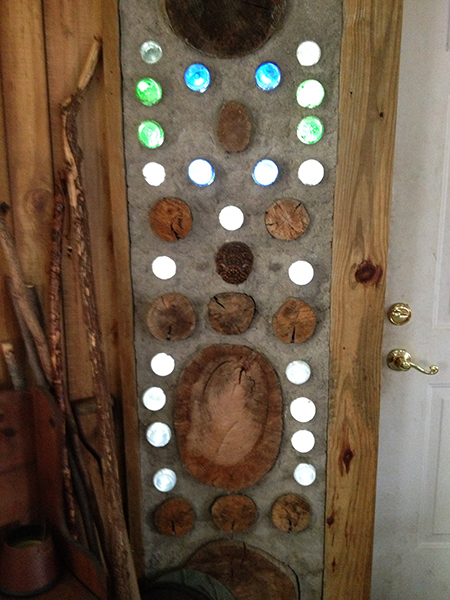 We learned a lot of lessons from the Mormons back then. The LDS church encourages families to store enough food for a year. I think that’s a hold-over from the pioneer days when families struggled to walk all the way to Salt Lake City without starving. Their basic list is to store rice, beans, and honey. Or these days you can also invest in freeze-dried meals. Some of the best long-term food storage companies are located in Utah, like The Ready Store. 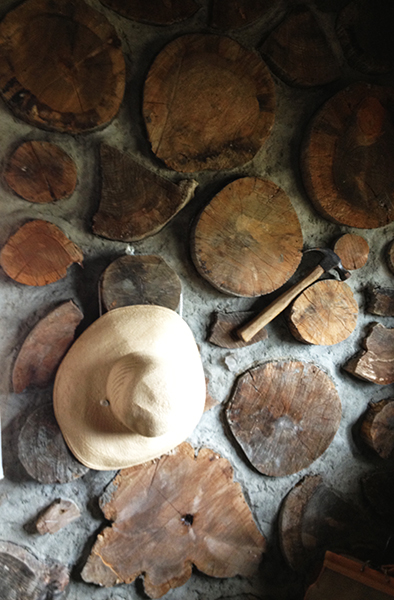 We outfitted the cabin with a lot of Amish goods, too. Amish folks always live without electricity, but they don’t skimp on comfort. We have running water at the cabin, but it’s delivered by an Amish pitcher pump instead of a faucet. Gas chandelier lights provide a cozy, warm glow at night – another Amish invention. Lehman’s of Kidron, Ohio is a wonderful resource for all things Amish. 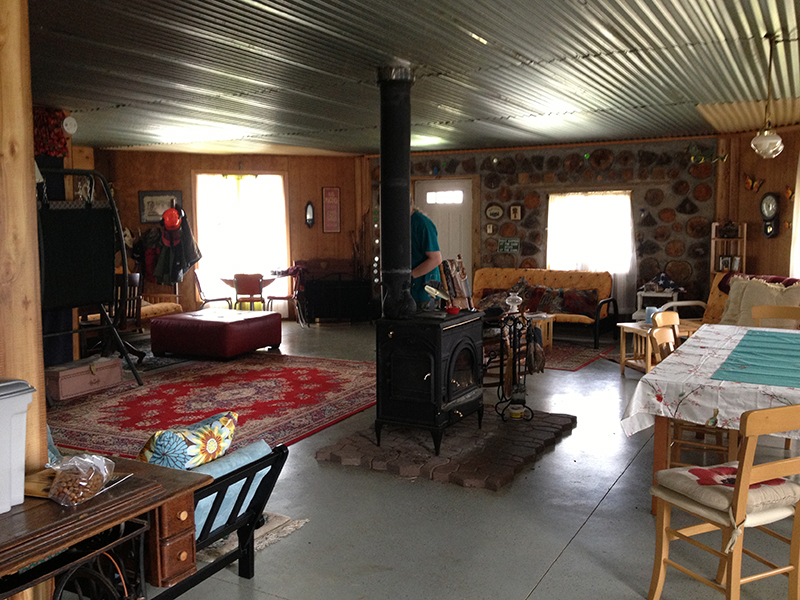 The cabin is easy to keep warm. A big Vermont Castings wood stove is in the center and radiates heat throughout the open floor plan. The foot-thick cordwood walls keep us insulated from cold as well. The downfall, though, is the summer heat and humidity. There’s just no way to cool the place down without an air conditioner, and after 20 years we still haven’t found an affordable off-grid solution to beating the heat. The thick walls do keep us 10 degrees cooler than the outside air in the summer, but it’s still mighty muggy. 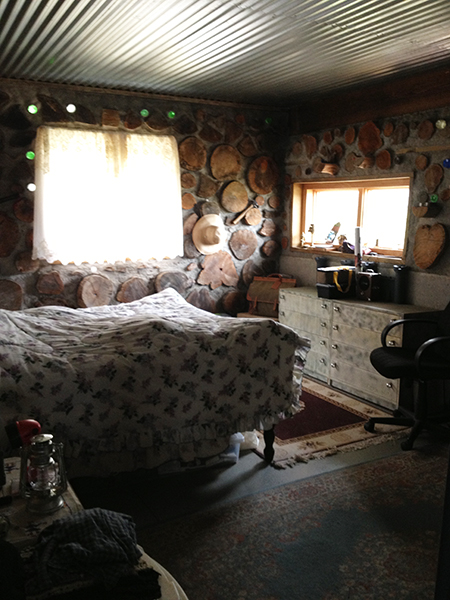 Our little cordwood cabin turned out to be a wonderful retreat. We lived here every other weekend for 15 years, until we moved to the farm full time. It sheltered us and our family for a week during the Great Ice Storm of 2009. And Tim and his buddies regularly host a Guys Weekend at the cabin. While it wasn’t built with a pandemic in mind, today I’m having lunch at the cabin just for a change of scenery during quarantine. 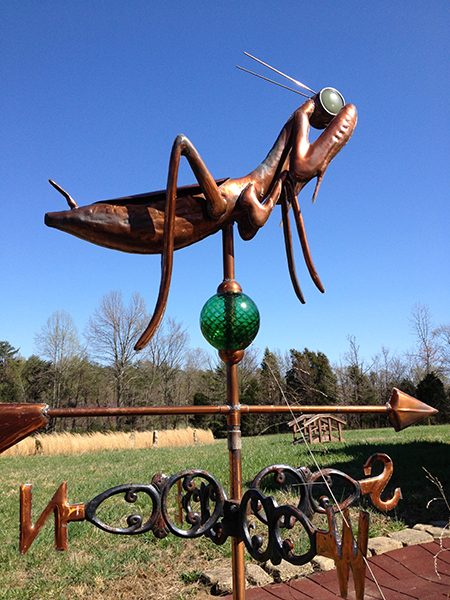 I hope you’re hunkered down comfortably at home, too? It’s never too late to become a “prepper.” Rice and beans. Stay safe everyone!

Playing In The Panhandle

Awesome Cuz, loved it when I was there for the Derby ♥️🙏

Richie, Tim and I love your little slice of survivalist heaven! Thanks for sharing it!

I love the history of your cabin. I have always been impressed by your energy, outlook, thoroughness and the actual production of your wonderful cabin in the woods. You and Tim are outstanding people.

Great photos as always! I was certainly young and stupid (once?) but never as ambitious or as adventurous as you all. Looks delightful. Stay well.

You guys are inspirational!!!! I would LOVE to see your place one day! Love you!!

Nice reading the history and remembering the process. The pictures are beautiful. Happy hunkering.

Richie-
Thanks s much for making me smile with this post today. SOOOO many happy memories at that cabin. <3

Keep safe and we'll see you when this is all over.
Love,
Deb