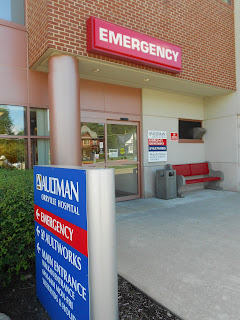 Tim got stoned in Ohio. Gall stones, that is.

Sunday morning he woke up very ill. We packed up in a hurry and took him to a regional county hospital. Mind you, we were way out in BFA (Bum F–k Amish) country at the time. And while I’ve got nothing against the Amish, I don’t have a clue about the quality of their medical services. I was a little worried they might tell him to put zee lime in dee coconut and drink it all up.

Turns out they were competent and efficient at preliminary rounds of tests, and told us immediately Tim needed to go to the “Big Hospital” — I’m thinking Cleveland, but they meant Canton.

So here were are in Canton, Ohio for the last two days. Tim went by ambulance; the driver shouted “Follow me!” and peeled out. I lumbered behind by a good hour, going horse and buggy speed in the motorhome.

By the time I found him on the fifth floor of  Mercy Medical Center (yeah, it really is a big hospital), they were already mumbling about surgery. Having just lost his mother only a few weeks ago to the same procedure, the anxiety knob got turned to 11.

Fortunately the Calvary arrived. My parents made the four-hour trip in just under three and a half, and saved me from a complete melt-down. They took a hotel for the night, and the dog & I camped out in the vast and empty hospital employee parking lot in the motorhome. It was a nervous and sleepless night, followed by a rude rousting at 5:00am by security, who told me I had to move the coach because first shift was coming in.

Which brings us to today, Monday. Tim looked a bit improved today, the meds kicked in overnight, but he’s still really sick. They’re doing more tests and keeping him another night at least.

I found a campground a few miles away (to save the poor dog from baking in the parking lot another afternoon), Enterprise delivered me a car, and we’ll see what tomorrow brings.

Escape To The Lake!