Got delayed leaving South Dakota because of the condensed-soup fog that draped the area until 10am. Nearby was Ellsworth Air Force Base, and we could hear the fighter plane afterburners somewhere above us, but couldn’t spot them through the mist. 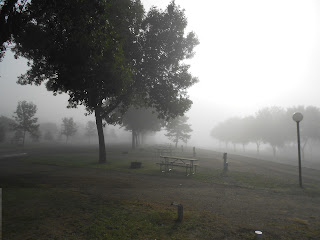 We tamped down the miles today, despite the late start, skating through half of South Dakota, all of southern Minnesota, and a big diagonal across Iowa. We’re camped close to the border of Illinois.
Minnesota and Iowa are surprisingly progressive in their commitment to alternative energy. We saw enormous wind turbine farms, stretching for miles across the Plains. Remind me to buy stock in the company who makes these giant turbines – they’re making a fortune out here! 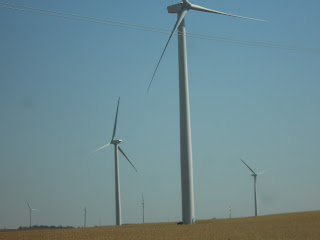 For hundreds of miles we’ve been seeing billboards for the Whoa N’ Go truck stop. For days I’ve been looking forward to stopping there, figuring it would be like another Wall Drug. Quite a disappointment when we got to Jackson, MN and found it’s just a crummy gas station, and a small one at that. 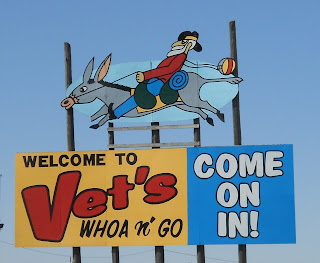 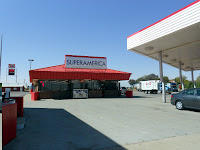 The high desert and prairie land are behind us, and now we see hardwood trees and corn farming. This is big agri-business at its prime. Thousands of acres meticulously groomed. The thing that’s so striking is there’s no variation in what I assume is genetically modified corn. All the plants are exactly the same size, color, and height. You’d think that once in a while a single plant might distinguish itself – a little taller, a little greener, maybe got more water or some extra raccoon poop fertilizer. But no. They’re all identical. It’s both freaky and monotonous at once. 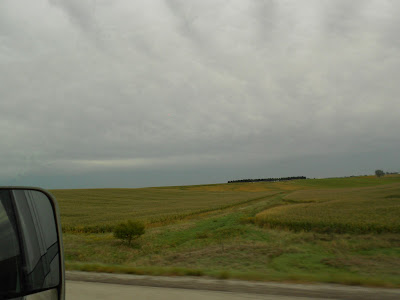